This page is for the Kiharas, the family of Mad Scientists who (for the most part) work for Academy City. 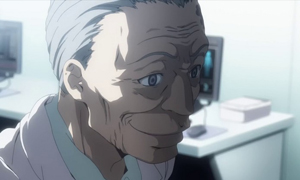 Head of the infamous Kihara family. He is Therestina and Nayuta's grandfather. He is also responsible for beginning the Level 6 Shift Project and the second one involving Mikoto. Commander of the Hound Dogs black-ops unit who serves directly under Aleister Crowley, Amata is a sadistic scientist, and the one who originally discovered Accelerator and taught him how to control his power.

One of the three Kiharas sent to attack Baggage City in New Testament Volume 4. She is killed by Kagun during the conflict.

One of the three Kiharas sent to attack Baggage City in New Testament Volume 4. He is killed after to being locked in an illusion by Útgarða-Loki.

A Kihara first sent to negotiate with the leaders of the Science Guardians in New Testament Volume 4. She often accompanies and assists Noukan. After Noukan is gravely injured at the end of New Testament Volume 14, she becomes the major antagonist for the next three volumes.

A golden retriever who became a Kihara when his brain was modified to have human-level intelligence. He is among the most influential of the Kiharas, and works directly for Aleister. After being mortally injured at the end of New Testament Volume 14, he is currently in cryogenic stasis to keep him from dying.

Retrieved from "https://allthetropes.org/w/index.php?title=A_Certain_Magical_Index/Characters/Kiharas&oldid=1627752"
Categories:
Cookies help us deliver our services. By using our services, you agree to our use of cookies.