A Certain Magical Index/Characters/Scientists and Researchers

The scientists and researchers working on the sidelines of Academy City in order to advance its technology and powers. While some of them are genuinely despicable, there are also those who care for the well-being of Academy City's students.

The Kiharas are on a page of their own. 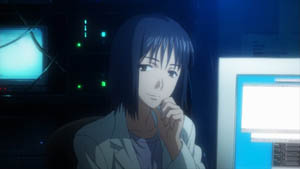 One of Academy City's researchers, as well as one of the direct heads of the "Level 6 Shift" She is also partly responsible for the rescue of Last Order from Ao's plans. She is one of Accelerator's guardians, and is also one of the few people whom he generally opens up to.

One of the scientists who worked on the Level 6 Shift Project, who also invested heavily in it. The closure of the project left him bankrupt. He infected Last Order's brain with a virus that would cause the Sisters to attack everyone around them. Accelerator stopped this, however, and Kikyou shot Ao to death.

A seventeen-year-old Child Prodigy from Nagatenjouki Academy. She is an expert on biopsychology, and was hired by one of the research facilities in Academy City to work on the Radio Noise project by using her Testament project, a device that allows the quick uploading of information into a human brain.

A skilled scientist in the field of cybernetics, despite still being a middle school student. She is introduced in the Dream Ranker arc of Railgun.

Retrieved from "https://allthetropes.org/w/index.php?title=A_Certain_Magical_Index/Characters/Scientists_and_Researchers&oldid=1551198"
Categories:
Cookies help us deliver our services. By using our services, you agree to our use of cookies.