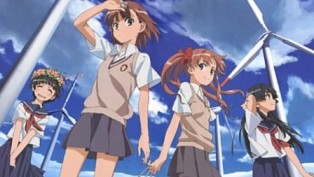 Mikoto Misaka is the third most powerful esper in Academy City, a state-of-the-art city dedicated to the study and development of superpowers. Along with her friends, she protects the city from the daily threats which disturb the city's peace. However, behind this idyllic, advanced city lurks a darkness which even the third most powerful esper in the city can't take on her own.

A Certain Scientific Railgun (とある科学の超電磁砲 , Toaru Kagaku no Rērugan) is a manga spin-off and supplementary reading to the A Certain Magical Index Light Novel series. Similar to the original, it has received an Animated Adaptation courtesy of J.C.Staff, which covers the first major arc of the manga as well as some anime-original material penned by the author. In addition, there are side-story novels which involve the protagonists with the Magic side.

This series shares a character sheet with A Certain Magical Index.

A Certain Wiki may help in understanding various terminologies that may be found on this wiki.

The anime has been licensed and released by FUNimation entertainment, along with both seasons and the movie of A Certain Magical Index.

A note on timelines: The manga's events begin two weeks before the Index novel and anime. The anime, however, violates this by adapting events from Volume 8 of the novels into the anime's first episode. As it stands, Chapters 18 to 39 occur around the time of Volume 3 in the novels, Chapter 40 is around volume 5, Chapters 41-42 and around volume 8 and Chapters 43-current take place around volume 9.

Tropes used in A Certain Scientific Railgun include:

Retrieved from "https://allthetropes.org/w/index.php?title=A_Certain_Scientific_Railgun&oldid=1964221"
Categories:
Cookies help us deliver our services. By using our services, you agree to our use of cookies.