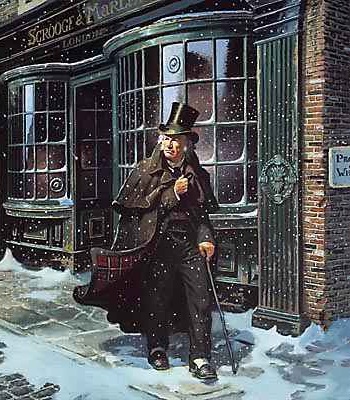 Novella by Charles Dickens that few people have read, but everyone knows the story of. But for the record...

Ebenezer Scrooge, a hard-hearted, crotchety old moneylender living in Victorian London, is visited on Christmas Eve by the ghost of his late partner, Jacob Marley. Marley, wrapped in chains and weighted down with lock-boxes that symbolize his obsession with money, warns Scrooge that his life of greed and misanthropy will condemn him to an equally miserable afterlife, and that his only hope for redemption is in heeding the advice of three spirits who will be visiting him that night.

When Scrooge awakens to find it's still Christmas day, he makes good on his resolution to change his ways, and becomes a respected and generous figure.

Christmas as we know it is largely the result of the book's wild popularity, having taken what had become, in Anglo-Saxon Protestant countries, a relatively minor and disparaged holiday (due to Puritanical and/or anti-Catholic sentiments) and elevating it in the public consciousness. Before its release, many Protestant churches preached against the drunken debauchery associated with the holiday, and it was even illegal to celebrate Christmas in some parts of the US.

Possibly the most widely-adapted story of all time, including versions with the Muppets as well as in The Present Day, resulting in lots of Adaptation Expansion (explaining events and Backstory the book didn't cover). As the era of television wore on, countless shows did at least one episode thrusting a character into their own Christmas Carol-like scenario, with varying levels of quality. In fact, versions with pre-existing characters are so common that they have led to the creation of the Yet Another Christmas Carol trope. It's possibly also the source of the Pensieve Flashback.

The novel is in the public domain. You can read the original story on this wiki, on Wikisource, or on Project Gutenberg.

The website JimHillMedia.com (which focuses on Disney news and rumors) did a whopping 40-part series in 2007 called "Scrooge U" which examined many adaptations of this story, both famous and obscure, live-action and animated, serious and parodistic, with all kinds of alternate settings.

Not to be confused with actual Christmas Carols