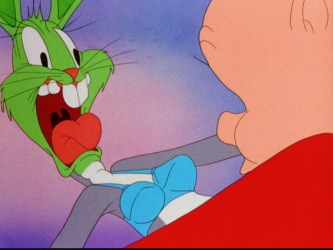 It Makes Sense in Context.

Voted no. 47 on Jerry Beck's The 50 Greatest Cartoons list, Bob Clampett's A Corny Concerto (pronounced "Con-Shir-To", by the way), a Merrie Melodies short from 1943 is a parody of Walt Disney's Fantasia, keeping the musical aspect fully intact, but throws Fantasia's highbrow attitude right out the window in favor of slapstick and hilarious sight gags (as well as throwing in sound effects and Voice Grunting). The short is split into two segments: "Tales from the Vienna Woods", which is centered on one of the very few times Bugs Bunny and Porky Pig have shared screentime, and "Blue Danube", which is a retelling of "The Ugly Duckling" with Daffy Duck (or a baby version of him at any rate).

This short is in the public domain and can be viewed here.

The short has also made it onto The 100 Greatest Looney Tunes list.

Tropes used in A Corny Concerto include:
Retrieved from "https://allthetropes.org/w/index.php?title=A_Corny_Concerto&oldid=1523960"
Categories: