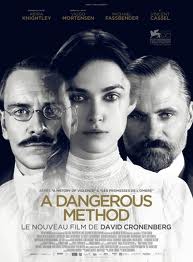 A Dangerous Method is a 2011 period drama directed by David Cronenberg. It concerns the beginning of Carl Jung's (Michael Fassbender) career in psychoanalysis, told through his relationships with a patient, Sabina Spielrein (Keira Knightley), and his mentor, Sigmund Freud (Viggo Mortensen).

Jung, an up-and-coming Swiss doctor, is working at a sanatorium when he begins to treat a Ms. Sabina Spielrein. Sabina, a Russian Jew, is hysterical, and Jung decides to try the "talking cure" being popularized by Freud in Vienna. The treatment proves successful, and Sabina returns to medical school, staying in contact with Jung. The two develop a romantic relationship, with Jung dissatisfied with his marriage to a young Swiss heiress. Their affair is intellectual (exploring Jung's fascination with memes and classic archetypes) and sexual (exploring Sabina's masochism in a consensual environment). Eventually, the guilt of his infidelity overwhelms Jung (as well as rumors revealing its existence to the public), and he ends the affair despite Sabina's vehement opposition. Eventually, the two reconcile and re-initiate their affair, but this time, Sabina breaks it off to go work in Vienna with Freud.

Meanwhile, Jung and Freud begin a correspondence. While impressed with Freud, Jung has reservations about his rigidly sexual approach to the human psyche. Freud brands Jung his successor and heir, reinforcing the paternalistic relationship. The two collaborate but continue to grow apart for a variety of reasons: Jung denies that all psychology is sexual and final, while Freud denounces Jung's interest in non-traditional venues of psychological study, which he calls "mystical nonsense." The two also chafe at their sociopolitical differences; Freud a Austrian Jew with little expendable income, and Jung a wealthy Swiss Protestant. This is all complicated by Jung's affair with Sabina; the young woman turns to Freud after their affair ends, and Jung feels betrayed, convinced she has chosen Freud's interpretation of psychoanalysis over his.

The film ends with Jung approaching a nervous breakdown, cut off by Freud and Sabina.

Tropes used in A Dangerous Method include:
Retrieved from "https://allthetropes.org/w/index.php?title=A_Dangerous_Method&oldid=1500371"
Categories: