Everything About Fiction You Never Wanted to Know.
(Redirected from A Day in The Slimelight)
Jump to navigation Jump to search 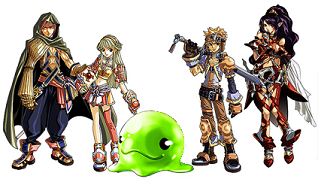 A spin-off game or story (or a side story or special episode) that focuses on a Mascot Mook whose only purpose was to die by the dozen in the original.

Usually will center around an exceptional member of the Henchmen Race. If the events of this story are canon this guy might become the Ascended Extra on par with the original heroes. Some of them will be hunting their own kind on the heroes' side, others will be trying to make it through Mook Promotion and become a Big Bad on their own right.

Usually played for comedy (it's funny to see things from the point of view of someone you didn't even consider important enough to be having any sort of private life or backstory).

Compare Lower Deck Episode, Villain Episode, and A Day in the Limelight, which involve actual characters being given the spotlight, instead of generic NPCs.

Examples of Breakout Mook Character include: