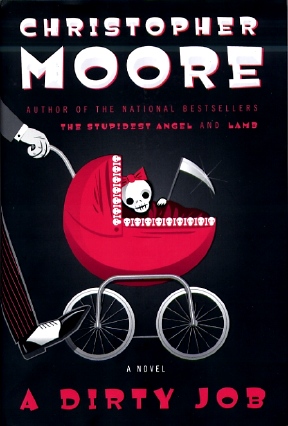 A novel by Christopher Moore, published in 2006. It deals with Death, Psychopomps and loss.

Meet Charlie Asher, content and loving husband and owner of a thrift store in San Francisco. This all changes when his pregnant wife dies after giving birth to their first and only child, Sophie. After her death Charlie finds that things are just not the same. For starters, objects from his shop start to glow, he starts getting attacked by giant ravens and people start dropping dead all around him.

A man in a mint-green suit contacts Charlie and tells him that this is all happening because he is a Death Merchant, a sort of Grim Reaper tasked with saving souls from the Forces of Darkness.

Tropes used in A Dirty Job include:
Retrieved from "https://allthetropes.org/w/index.php?title=A_Dirty_Job&oldid=1481023"
Categories:
Cookies help us deliver our services. By using our services, you agree to our use of cookies.