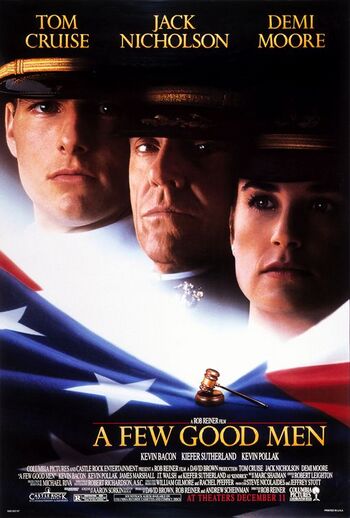 A 1989 play made into a 1992 movie directed by Rob Reiner, written by Aaron Sorkin and starring Tom Cruise and Jack Nicholson, A Few Good Men is a military-themed courtroom drama in which young lawyer Kaffee (Cruise) defends two Marines accused of murder, who say they were acting under orders from Col. Jessep (Nicholson). The movie is mainly famous today for its "You want the truth? You can't handle the truth!" Motive Rant at the end.

You can't handle the tropes!
Retrieved from "https://allthetropes.org/w/index.php?title=A_Few_Good_Men&oldid=1830816"
Categories:
Cookies help us deliver our services. By using our services, you agree to our use of cookies.