A Game With a Kitty 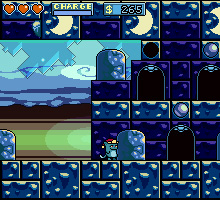 “Can I has you turban?”[sic]
—Kittey, requesting the random genie woman's turban.

“Ow! I hate you!”
—Glasses, after being stomped on the head.

A Game With a Kitty is the tale of Kittey, a cat charged with exploring a recently-appeared tower by his fellow residents of Kicas, because—well, there really isn't much of a reason. They just don't seem to like him. Along the way, he explores various environments, gains new powers, and challenges some random guy with a bottle rocket.

It is every bit as weird as it sounds.

That being said, A Game With a Kitty is certainly worth downloading. Assuming you aim for 100% Completion, it only takes a few hours to complete.

This game also has a prequel (Darkside Adventures) and a sequel (A Game With a Kitty 3).

Tropes used in A Game With a Kitty include:

Kittey: Are you a boy or a girl?