A Glass in the Hand 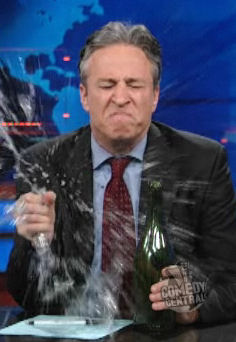 We've all seen this before. Perchance the character Does Not Know His Own Strength. Maybe he's entering a Heroic BSOD. Perhaps her Berserk Button has just been pushed. Whatever the reason, one thing is certain: that glass in their hand doesn't stand a chance.

Next thing you know the character has clenched the glass (or other breakable object) so hard that it shatters in their hand. Depending on the mood, realism of the work and the thing that broke, there may be a cut to a dramatic closeup of blood dripping down from the hand that got cut on the shards. If the character is mad enough they're likely to not notice the bleeding, which might be a good sign that it's time to start running away really, really, fast.

What shatters doesn't have to be a cup; it doesn't even have to be made of glass. It can be a metal can being crushed, or paper being crumbled unconsciously. The important thing in this situation is the distress of the character which caused them to inadvertently crush whatever they were holding. A purposely snapped pencil is a common way to show Suppressed Rage, especially when it becomes personal.

This trope can be used to heighten drama or, in the case that the character breaking the glass is unscathed, played for comedy.

A subtrope of Dramatic Shattering. Truth in Television under certain (painful) circumstances, but usually invokes the Soft Glass effect. Result of Rule of Drama, or possibly Rule of Funny, depending on the mood of the scene. Intersects with Knuckle-Cracking. Geometric opposite of Drop What You Are Doing.

Examples of A Glass in the Hand include:

Alt Text: Hey, what did that orange ever do to you?!