A Glass of Chianti 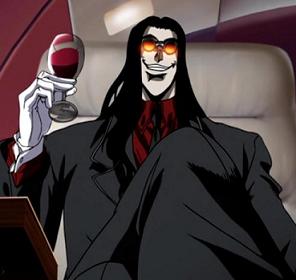 Many Big Bads, being more high-class than most heroes, like to sip some wine, usually red, while lounging on their throne. This makes them seem refined and worldly, even when relaxing. Heroes and more petty villains go for the more boorish beer, usually because they either can't afford wine or they have no taste for the stuff.

Note that red is seen as a lot more sinister than white wine, due to its Color Coding and general connotations with blood. When a vampire (usually richer and more refined, not one of the biker vamps) drinks red blood from a wine-glass, it invokes much the same imagery, and one can argue that villains drink red wine specifically to invoke the vampiric example.

Villainesses and neutral Femmes Fatales also have the option of sipping white wine and champagne ("girly" wines), and seductively drinking from a tall flute glass and peering through the bubbles at the hero.

Another common variant is the Snifter of Brandy, preferably poured from a snazzy, cut-glass decanter.

If these type of villains suffer a Villainous Breakdown, it's likely that there will be a Dramatic Shattering of that glass of wine as a metaphor for the breakdown.

Subtrope of Wine Is Classy. Wine, especially rare and expensive wine (and the ability to identify vintages of it by sight, smell, and taste), has become a cliche commonly associated with the Grey Poupon set. This can be used to indicate someone is a snob, or simply as a part of the background culture of the story. Further, red wine is more often an acquired taste, possibly hinting that one had the funds to develop it.

It might be worthy of note that Chianti is not actually a high class wine, and Fava beans aren't gourmet food, either. However, both are very rich in iron, as is the liver - and blood. Also, iron interacts with certain types of psychiatric medication, implying that Lecter was off his meds. The hint is rarely ever taken, though. Alternately, maybe he thought a census taker didn't deserve the good stuff.

Examples of A Glass of Chianti include:

Retrieved from "https://allthetropes.org/w/index.php?title=A_Glass_of_Chianti&oldid=1914296"
Categories:
Cookies help us deliver our services. By using our services, you agree to our use of cookies.