A Land Fit for Heroes 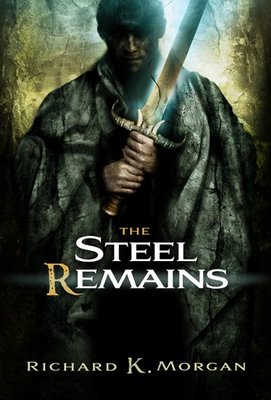 A Land Fit for Heroes is a 'Fantasy Noir' trilogy by the British author Richard Morgan (writer of the gritty Cyberpunk Altered Carbon trilogy). It is written in a similar vein to the Joe Abercrombie The First Law trilogy; dealing with a fairly Crapsack World fantasy world.

The world the books are set in is, like the First Law trilogy, very far into the cynical hand of the Sliding Scale of Idealism Versus Cynicism, and the intention to subvert and deconstruct a certain number of Fantasy tropes.

The trilogy follows three heroes of a great war that took place 9 years before the beginning of the story, fought against the aquatic Scaled Folk who invaded the human lands from the western ocean hints are given that the Scaled Folk invaded human lands as they themselves were fleeing something even nastier in the west.

All three heroes, previously war-buddies, are now disgusted by their actions following the war, the way their various societies now mistreat and ignore them and are all haunted by the ones they lost during the conflict. Soon, however, they are drawn into a new adventure.

Books in the series:

Tropes used in A Land Fit for Heroes include: