A Load of Bull 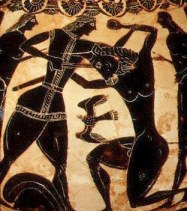 Talking bulls or bull-men, especially those who stand on two feet (usually hooves, though not always). They tend to take strength-based characteristics, most likely be a Mighty Glacier, rarely a Fragile Speedster.

This trope goes all the way back to the Gud-alim of Mesopotamian Mythology, so it's Older Than Dirt. The later myth of the Minotaur has directly inspired about 99% of all examples below.

Examples of A Load of Bull include:

Retrieved from "https://allthetropes.org/w/index.php?title=A_Load_of_Bull&oldid=1898307"
Categories:
Cookies help us deliver our services. By using our services, you agree to our use of cookies.