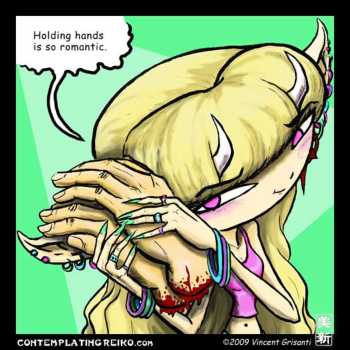 A character has a... physical relationship with a severed body part of some sort, taken off some person. This is about the most pleasant way of putting things—for obvious reasons, this trope induces some very heavy Squick, and is usually a sign that the character is quite severely disturbed.

See also I Love the Dead, Mummies At the Dinner Table and the more literal examples of being Stuffed Into the Fridge.

Examples of A Love to Dismember include:

Retrieved from "https://allthetropes.org/w/index.php?title=A_Love_to_Dismember&oldid=1842183"
Categories:
Cookies help us deliver our services. By using our services, you agree to our use of cookies.