Man in a Bikini

Everything About Fiction You Never Wanted to Know.
(Redirected from A Man Should Never Wear a Bikini)
Jump to navigation Jump to search 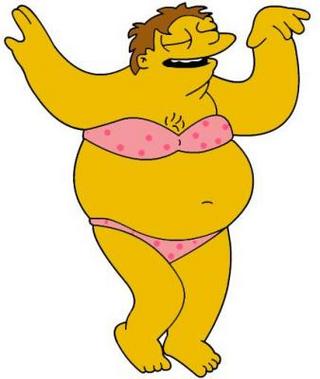 Bikinis are usually shown on television as Fan Service. However, men shown wearing them are likely to be done for Fan Disservice or Played for Laughs.

Very occasionally they will be shown as Wholesome Crossdresser - type characters.

They're also worn by Mr. Fanservice types for Fanservice.

However, this is also Truth in Television: some males will, and do, like wearing bikinis, despite the fact they are technically opposite-sex clothing. This does not include Drag Queens who like to do this for comedy purposes.

Examples of Man in a Bikini include: