Everything About Fiction You Never Wanted to Know.
(Redirected from A Match Made in Hell)
Jump to navigation Jump to search 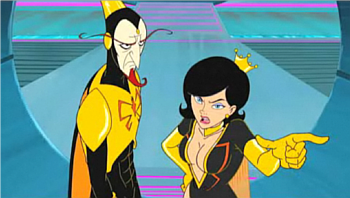 "Once you have frozen mankind, these babies will overrun the globe, and we shall rule them, for we will be the only two people left in the world."

You know how the story goes, right? The Big Bad meets The Baroness, The Baroness meets The Big Bad, their eyes meet, and horribly discordant music that sounds not unlike the screaming of tortured souls arise. It's black magic... a match made in hell!

Lord Worldbreaker and Lady Firestorm are, individually, serious threats to the heroes, but what happens if they're suddenly working intimately together? That's when it gets really dangerous. A pair of villains capable of channeling The Power of Love is enough to give even the most hardened group of heroes a serious challenge, and worse yet, seeing the villains in love may make them doubt their own motivations. Should one of the villains fall, the other one grieving over their fallen lover is quite likely to initialize an Alas, Poor Villain scenario, and maybe even a My God, What Have I Done?. Should another villain start messing with the happy couple, it's usually played as a Kick the Dog moment.

...of course, these people are villains, so you can never really be sure that one or both of them isn't just playing at being in love, in order to manipulate and use the other. If the love was genuine but unrequited, expect the one who genuinely loved to sacrifice her life to protect the other, only for him to disdainfully ignore her as she lies dying, proclaiming that she's no longer useful to him. Which, of course, makes him the worst kind of bastard imaginable.

If both were faking it, expect them to show their True Colors at the same time. Hilarity Ensues - and it's never mentioned ever again.

The most classic version of this trope occurs when two previously established antagonists suddenly take a newfound interest in each other, but it can also involve a newcomer falling for an established villain, or even a pair of villains who were, from the beginning, a 'villainous couple'. In the first-mentioned scenario, Strange Bedfellows may occur in order to match the united power of the couple (ironic, huh?) - which can get particularly interesting if the 'bedfellow' is another villain, who is driven by jealousy...

May form a Big Bad Duumvirate.

Compare Villainous Friendship, when the two are truly friends with each other, but not in a romantic way. Contrast Minion Shipping and Mad Love. Outlaw Couple is basically the petty crime version of this. In the case of fiction with multiple villains where taking two out of the equation would still leave a bunch of bad guys, if it's genuine on both sides this can be used as a prelude to a Heel Face Turn or at the very least a "Get Out of Jail Free" Card. If the couple in question is heterosexual, expect the man to be the more important half of the couple, possibly making her more of a Dark Mistress.

Examples of Unholy Matrimony include:

Martin: They have complementary insanities. Don't justify it with anything more than that.

Roy: Who does the green line represent?
Deva: A hypothetical offspring of Cruella de Vil and Sauron.

Trudy: We both had this... appreciation for the sadistic and morbid. We enjoyed our evil pranks so much that we quickly fell deeply in love with each other. It was black magic.

The Author: Then by the power invested in me by myself, I now pronounce you husband and wife. You may kiss the bride, though I would prefer if you didn’t.

Slo-Mo: I like a man who does it fast.
Nanosec: I like a girl who takes it slow.