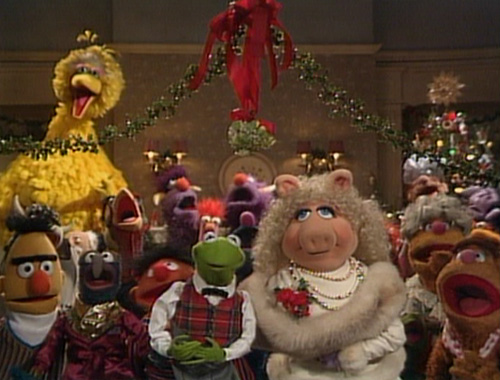 A portion of the cast poses for the closing shot.

The best-remembered of several Christmas Specials featuring the Muppets; it could probably be better called A Henson Family Christmas. It originally aired on ABC in 1987.

Fozzie Bear has packed up the Muppets crew and brought them with him to surprise his mom for Christmas. There's just one problem: mom's scheduled a trip to Malibu and rented out the farm house to Doc (of Fraggle Rock), who's looking forward to a quiet Christmas in the country. Throw in the Fraggles themselves, the Sesame Street gang, and even a bit of Muppet Babies, and Hilarity Ensues.

Tropes used in A Muppet Family Christmas include:

Gonzo: I knew you'd learn to love us!
Doc: I didn't say that.

Ernie: C'mon, Bert. Somebody has to play Mama, and you lost the toss!

Doc: (amused) Don't you hate it when you can't speak the language?

Oscar: (while caroling) I will NOT sing this song!

Statler: Hey, this page is comparing us to Cthulhu!
Waldorf: Well, you're an Old One, but you sure aren't Great!
Both: Do-ho-ho-hoh!