A Piece of Phantasmagoria 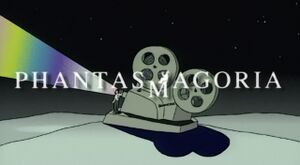 Phantasmagoria (In Japanese ファンタスマゴリア, released in America as A Piece of Phantasmagoria), is a 1995 series of 15 five-minute episodes by illustrator Shigeru Tamura, based on a earlier children book by him. It was distributed by Bandai Visual in America, and broadcast in the now defunct Latin-American channel Locomotion.

The series deal with snippets from the daily life of the inhabitants of the titular planet. But the planet of Phantasmagoria is anything but usual: the night sky is projected by a giant planetarium, the colors for paints are obtained by scrapping a rainbow, there is a glass ocean, people with stars for heads, walking buildings, sentient cacti, and a town made of bread, among several other wonders.

The third episode, "Glass Ocean", was eventually expanded into a 22 minutes short film titled The Glassy Ocean in 1998.

Do not confuse with the video game of the same name.

Tropes used in A Piece of Phantasmagoria include: