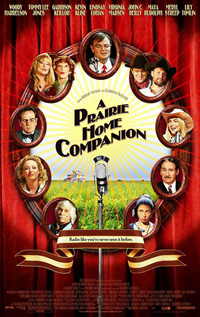 One of the more popular old-time Radio variety shows, A Prairie Home Companion was created by Garrison Keillor in 1974 and continued to broadcast faithfully until 2016 from St. Paul every Saturday to a totally loyal audience. It was popular for several reasons, chiefly nostalgia for the good old days of radio--which this is very, very evocative of--and Keillor's distinctive comedic style. Its successor is the Minnesota Public Radio show Live from Here.

Though the guest stars and location vary the segments almost always included are:

The radio show was adapted into a film (famed director Robert Altman's last) in 2006 - starring an Ensemble Cast and Garrison Keillor As Himself - which was generally well-received.

Tropes used in A Prairie Home Companion include:

Retrieved from "https://allthetropes.org/w/index.php?title=A_Prairie_Home_Companion&oldid=1729952"
Categories:
Cookies help us deliver our services. By using our services, you agree to our use of cookies.