Everything About Fiction You Never Wanted to Know.
(Redirected from A Pup Named Scooby Doo)
Jump to navigation Jump to search 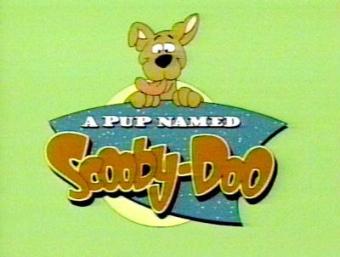 A Pup Named Scooby-Doo is a cartoon show featuring younger versions of the Scooby Doo cast (but is not set in the same continuity). It featured the "Scooby-Doo Detective Agency" as pre-teens who, like their older counterparts, solved supernatural themed mysteries in which the Monster of the Week turned out to be some crook in a mask. The show lasted from September, 1988 to August, 1991, a total of 30 episodes.

The show was a lot wackier and zanier than the original show. It hung plenty of lampshades on tropes used by the previous incarnations of the series. The show also made significant changes in the primary cast from the original source, justified in that they were younger and less mature versions of the original characters.

If that description sounds familiar, by the way, there's a reason for that: The team at H-B that created APNSD is also responsible for Tiny Toon Adventures and Animaniacs. They left for Warner Bros after the first season was finished.

More recently, the concept of revisiting the cast in their earlier years appeared in the movie Scooby-Doo: The Mystery Begins (meant to be a prequel to the original Scooby-Doo live action movie series) and the video game Scooby-Doo: First Frights. The movie set them as meeting in high school while the video game had them meet in elementary school.

Notable as the last series in which Don Messick played Scooby-Doo.

The show uses several of the same tropes as the original series as well as many of its own.

Tropes used in A Pup Named Scooby-Doo include:
Retrieved from "https://allthetropes.org/w/index.php?title=A_Pup_Named_Scooby-Doo&oldid=1750726"
Categories: