A Sangheili's War Is Never Over

Everything About Fiction You Never Wanted to Know.
(Redirected from A Sangheilis War Is Never Over)
Jump to navigation Jump to search 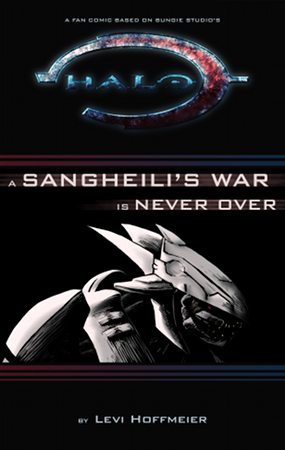 A Sangheili's War Is Never Over is a Halo Fan Web Comic written by the comic and concept artist Levi Hoffmeier, commonly known as Leviathan, also the author of Halo: A Fistful of Arrows. It takes place after the events of Halo 3 and regards the Arbiter and his fellow Elite warriors in the schism against the Brutes following the dissolution of the Covenant.

The Human-Covenant War has ended, but the Great Schism has begun and the warring space fleets of Sangheili (Elites) and Jiralhanae (Brutes) have been battling for dominance ever since the Covenant's breakup. However, the fight has been dragging to a stalemate, and the Brutes are beginning to pick up the slack and develop better strategy, and may even risk invading the Sangheilian homeworld. Discussing this matter aboard the flapship Shadow of Intent, the famed Arbiter Thel 'Vadam formulates a plan for the rest of the Elites. He will descend to the surface of the Brutes' homeworld, Doisac, and challenge their most powerful chieftain to a duel. Whoever wins the duel wins the leadership of the galaxy.

Unlike Leviathan's later work A Fistful of Arrows, Sangheili's War is comparatively shorter, as well as a taking a more "comic book" art style with starker lines and contrasting shadows as opposed to to his usual "painterly" style. It's also faster paced with greater emphasis on action and boasting speeches, and the characters share more trusting relationships.

The comic can be read here, at Leviathan.Bungie.Org, or here, at Deviant ART.

Tropes used in A Sangheili's War Is Never Over include:
Retrieved from "https://allthetropes.org/w/index.php?title=A_Sangheili%27s_War_Is_Never_Over&oldid=1681345"
Categories: