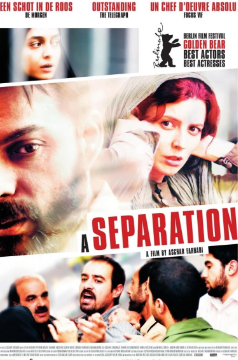 A 2011 Iranian drama about the pair who decides to separate on the ground of their irreconcilable goals: Simin wants to leave Iran in order to give her daughter Termeh a chance to grow up in a less restrictive culture, whilst Nader believes his primary obligation is to care for his father, who suffers from Alzheimer disease. The film subtly comments on cultural and psychological differences by confronting the two main characters with another married pair with less education and more traditional worldview - Hodjat and Razieh. Apart from all that, it is a compelling crime story full of suspense and plot devices characteristic for Agatha Christie's books.

Tropes used in A Separation include:
Retrieved from "https://allthetropes.org/w/index.php?title=A_Separation&oldid=1526088"
Categories: