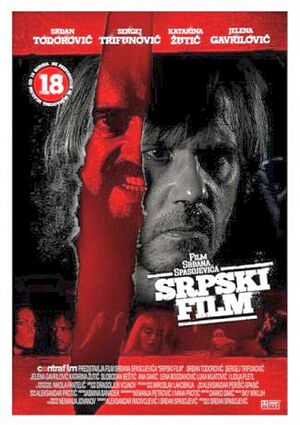 Entering the film with misgivings, it only gets worse for Miloš, as it soon becomes apparent that he is involved in a very questionable film which will end up being a snuff film. After a particularly unsettling series of violent pornographic shoots, Miloš tries to quit, only to be kidnapped, drugged and forced back into the production. He wakes up three days after the kidnapping, with only a video camera and some tapes in his possession. Miloš watches the tapes to regain his memory, and discovers the horrors that he has witnessed.

WARNING: The contents of the film are widely considered to be extremely disturbing, so check the examples below at your own risk. Bring the Brain Bleach if necessary.

Tropes used in A Serbian Film include:
Retrieved from "https://allthetropes.org/w/index.php?title=A_Serbian_Film&oldid=1822639"
Categories: