A Song of Ice and Fire/Characters/House Baratheon

This is a listing of member of House Baratheon that appear in the Fantasy series A Song of Ice and Fire. Visit here for the main character index. 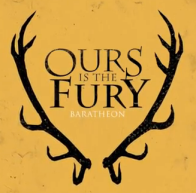 The current royal house. A house with a tradition of being aggressive, they rule the stormy eastern coast. Their brutal treatment at the hands of Aerys the Mad made them the first to rise in rebellion against the Targaryens. The impregnable castle Storm's End is their seat. The Baratheon sigil is a black stag, crowned since they became the royal house. The youngest of the Great Houses, and descended from the early Targaryens.

How do you fight someone if you can't hit them?

The King of Westeros when the story begins, he was the victor of the first civil war, known variously as "The War of the Usurper" or "Robert's Rebellion." A brave and unstoppable warrior in his youth, the death of the woman King Robert loved has caused him to degenerate over the years into a fat drunk man whose only interests are eating, drinking, hunting and whoring. Since he is uninterested in governing the realm, the real power lies with Varys and Jon Arryn. He hates the Targaryens but can't control his own vassal lords. He is eventually murdered by his wife Cersei, who orchestrated a hunting 'accident.'

"Rhaegar won, damn him. I killed him, Ned, I drove the spike right through that black armor into his black heart, and he died at my feet. They made up songs about it. Yet somehow he still won. He has Lyanna now, and I have her."

"So long as I am your King, treason will never go unpunished! Ser Ilyn, bring me his head."

The firstborn son and successor of King Robert. Actually the son of Cersei and Jaime Lannister, who have an incestuous relationship.. He is betrothed to Sansa Stark, who completely falls in love with the handsome Prince. He gradually reveals what he really is, however, and It Got Worse.

Tommen: "When I'm king in my own right, I'm going to outlaw beets."

Eight-year-old Myrcella and seven-year-old Tommen are Cersei's other two children. They also are nothing like their older brother Joffrey: they're sweet-tempered, nice and gentle. In short, Innocents. Their favorite family member is their uncle Tyrion. Of course, considering how much of a Crapsack World this is, it probably won't end well for them.

"Great or small, we must do our duty."

"There is no creature on earth half as terrifying as a truly just man."
Varys, about Stannis

King Robert's stern and uptight younger brother, Stannis is a man obsessed with his principles and always, always does what he feels to be his duty. He finds out that Joffrey is not Robert's son, and rebels after his brother's death since he's his sole heir. He is unpopular with the people for his merciless sense of justice, but proves to be a very complex man who dislikes what he forces himself to do.

Stannis: Robert could piss in a cup and men would call it wine, but I offer them cold clear water and they squint in suspicion and mutter to each other about how queer it tastes.

Stannis: He reminded me of my duty, when all I could think of was my rights.

"Loras, stay and help me pray. It has been so long I have quite forgotten how."

King Robert's youngest brother. A handsome, flashy and charismatic young man, he is very popular with the common people. Later, Renly refuses to support either his nephew Joffrey's claim to the throne or his brother Stannis's rebellion, and declares himself King since that he has the largest army in Westeros thanks to his alliance with the Tyrells.

Jaime, to Loras: "Sheath that sword or I'll shove it someplace even Renly never found."

"I have it in me to be a great king, strong yet generous, clever, just, diligent. loyal to my friends and terrible to my enemies, yet capable of forgiveness, patient-"
"-humble?" Catelyn supplied.
Renly laughed. "You must allow a king some flaws, my lady."