A Song of Ice and Fire/Characters/House Greyjoy

This is a listing of member of House Greyjoy that appear in the Fantasy series A Song of Ice and Fire. Visit here for the main character index. 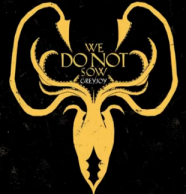 The rulers of the Ironmen, the warlike seafaring culture of the Iron Islands. The Greyjoys used to make their living by raiding mainland Westeros and are actually proud of raping the women of their victims. As their house words show, they take pride in the fact that they perform no honest labor of their own, preferring to steal from others instead. They do not consider themselves members of the Seven Kingdoms, and will rise up at the first opportunity. House Greyjoy and their people have similarities to both the Vikings and the North Irish, since they are driven by a generational hatred against the mainland oppressors. Their seat is at Pyke and their sigil a golden kraken.

The head of House Greyjoy at the start of the series, brother of Aeron, Victarion and Euron, father of Asha and Theon. A cold, grimly determined and humorless man who wants to return the Ironmen to the heights of their historical power, before Aegon the Conquerer destroyed their holdings on the mainland. He rebelled once against Robert's regime when it was still new, only to be defeated and have two of his sons killed while Theon, the last, was taken as a hostage for his good behavior. When he hears about the new war breaking out, he knows it is time to strike again...

Last surviving son of Balon Greyjoy, after his elder brothers were killed in an ill-fated rebellion, and heir to the Iron Islands. Eddard Stark took him hostage after Balon's uprising ended, and Theon is a reluctant member of the Stark household as the story begins. Skilled fighter, ladies' man, and a schemer whose ambition is much bigger than his ability. His constant desperation to prove himself sets him up as the main villain of the second book. By the fifth book he's been driven through insanity and out the other end by Ramsay Bolton's tortures, and now has a few less fingers, toes and teeth. His mind shifts from his new identity of Reek, Ramsay's slave, to his memories of who he once was and back again.

Balon's only daughter and an accomplished raider. A strong-willed and independent lady, Asha is very ambitious and often enjoys teasing her weaker brother, Theon. Popular with the crew of the ship she captains but resents the unwillingness of the ironmen to accept a female leader.

Once a laid-back fellow who partied too hard, Aeron suffered a Near-Death Experience that left him a changed man. As a fervent priest of the Drowned God, he is fiercely dedicated to his faith and seeks to hold the Iron Islands to the old traditions. Needless to say, having Theon (whom he sees as weak), Asha (who seeks to disrupt the patriarchal order of House Greyjoy), and Euron (self-explanatory) in his family complicates this.

Younger brother of Balon and heir-apparent to the Seastone Chair, Victarion is everything a Greyjoy should be: strong, duty-bound and honorable. He is a powerful fighter, but has no great ambition beyond engaging in great battles. Though he prefers reaving and war to the complex world of politics, having only Asha and Euron as the alternatives to the throne forces him to throw his lot in at the Kingsmoot.

Also known as "Crow's Eye," Euron is a cunning pirate who was banished from his home by his family after he seduced Victarion's wife, forbidden to return for as long as his brother Balon lived. The day after Balon died, Euron returned. He wears an eyepatch and is feared by those around him for his reputation for cruelty and mind games. His longship is called the Silence, because all its crewmembers have had their tongues ripped out.

Theon's illegitimate cousin and squire who was born mute. Wex accompanies Theon on his travels/turn to villainy in the second book. It is revealed in A Dance With Dragons to have survived the sack of the Winterfell, and now serves as a secret source of information to the Stark-loyalist Northern lords.