A Song of Ice and Fire/Characters/House Lannister

This is a listing of member of House Lannister that appear in the Fantasy series A Song of Ice and Fire. Visit here for the main character index. 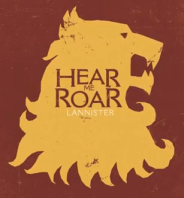 The richest house in Westeros. They control the Westerlands, with its hills and rich gold mines, and claim to descend from a mythical Trickster Archetype, Lann the Clever, who is said to have stolen sunlight for his hair. The Lannisters are powerful and controlling, and completely merciless to those they view as weak. They are effectively the royal house and become the nemeses of the Starks early on. They have notable similarities to the historical Borgia dynasty, as well as drawing some inspiration from various members of the Wars of the Roses. They have a second, unofficial motto--"A Lannister always pays his debts"--which is an invitation to Good Samaritans and a warning to Bad ones. Their members are beautiful, with Green Eyes and blonde hair, and their sigil is a golden lion.

"If your enemy defies you, serve him steel and fire. But if he bends the knee, you must help him back to his feet, else no man will ever kneel to you".

The patriarch of House Lannister, and former Hand of the King. He is the archetype of the powerful father. Obsessed with control and absolutely ruthless to enemies, he will destroy anyone who stands in his or his children's way. Tywin became cold and hard after spending a lifetime watching his kind and generous Lord Father being constantly manipulated and walked over by his bannermen and mistresses. He only became utterly cold after the death of his beloved wife, who was giving birth to Tyrion. Tywin is an extremely harsh and unforgiving man, terribly efficient at his job, and can't stand it when people laugh at him. He was killed by his son Tyrion, whom he hated, whilst sitting on the privy. It is well known that Tywin has never been seen smiling except on his wedding day and at the birth of Cersei and Jaime. Inspiration for the character likely comes from Duke Richard of York, and Edward I of England, aka 'Longshanks'.

And Robert's relief was palpable. As stupid as he was even he knew Rhaegar's children had to die if his throne was ever to be secure. Yet he saw himself as a hero and heroes do not kill children.

"I would open my legs for every man in King's Landing if that was what I had to do to keep my children safe."

Wife and Queen of King Robert. Twin sister of Jaime, older than him by perhaps a minute. A very ambitious and cunning woman, she hates the restrictions put on her because of her gender. She is a physically beautiful but morally repulsive Mama Bear/Evil Matriarch combination, and fiercely protective of her children.

Ned: I remember Robert as he was the day he took the throne, every inch a king. A thousand other women might have loved him with all their hearts. What did he do to make you hate him so?
Cersei: The night of our wedding feast, the first time we shared a bed, he called me by your sister’s name. He was on top of me, in me, stinking of wine, and he whispered Lyanna.

"There are no men like me. There's only me."

Jaime is one of the most beautiful and dangerous men in Westeros. A knight of the Kingsguard, he developed a bad reputation after backstabbing the King he swore to defend, causing him to be nicknamed "Kingslayer." He is the twin brother of Cersei, and the two share a strong resemblance. Jaime seems to be little more than a Jerkass until the third book, when he becomes a POV character and much, much more sympathetic.

"If you don't sheath that sword I'll shove it someplace even Renly never found."

"Do you think the noble Lord of Winterfell wanted to hear my feeble explanations? Such an honorable man. He only had to look at me to judge me guilty."

“I’m the bloody Kingslayer, remember? When I say you have honor, that’s like a whore vouchsafing your maidenhood.”

Tyrion: What sort of man do you take me for?
Cersei: A small and twisted one.

The last and least son of Tywin Lannister, Tyrion is a deformed dwarf nicknamed "the Imp." Though many scorn him for his hideous appearance and he is an embarrassment to the perfectionist Lannisters, Tyrion is the most compassionate and genuinely heroic of his family. He is also extremely smart and cunning like his father Tywin, but his family never appreciates what he does (except for Jaime). Tyrion is a favorite of author George R. R. Martin, and is probably the most popular character in the series.

Tyrion: I have never liked you, Cersei, but you were my own sister, so I never did you harm. You've ended that. I will hurt you for this. I don't know how yet, but give me time. A day will come when you think yourself safe and happy, and suddenly your joy will turn to ashes in your mouth, and you'll know the debt is paid.

"They call me half a man. What does that make the lot of you?"
That shamed them well enough.

Tywin's brother and right-hand man for many years, Kevan has, by choice, mostly lived his life in Tywin's shadow. He is known to be stolid and reliable, and doesn't come across as particularly villainous, and in later books is revealed to be a pretty decent man. He married Lady Dorna Swyft and sired four children, amongst them Lancel Lannister. He and Tywin are the only two remaining sons of Tytos Lannister; their younger brothers Tygett and Gerion both having predeceased them. They also have a sister, Genna, who married Emmon Frey, second son of the Late Lord Walder; her children include the late and unlamented Ser Cleos Frey.

The teenaged son of Kevan Lannister and younger cousin to Jamie, Cersei and Tyrion. The squire of Robert Baratheorn. Initially described as something of a wannabe Jamie, he serves as a side character during the first four books.

"Elia of Dorne. I killed her screaming whelp. Then I raped her. Then I smashed her fucking head in. Like this." * CRUNCH*

Called "The Mountain That Rides," Ser Gregor Clegane is the biggest man in Westeros. Apart from his freakish size, he is feared for his cruelty and unstoppable force on the battlefield. His most famous deed was smashing the baby Aegon's head apart against a wall and then raping his mother Princess Elia with the infant's brains still covering him before killing her. As the older brother to Sandor Clegane, he's responsible not only for Sandor's horrific burn scars, but also for the murder of their little sister and miserable childhood that made the Hound such a brutal and cynical man. He is a Complete Monster even among other Complete Monsters, and his overlord Tywin Lannister often uses him as a scourge and enforcer to spread terror.