A Song of Ice and Fire/Characters/House Stark

This is a listing of member of House Stark that appear in the Fantasy series A Song of Ice and Fire. Visit here for the main character index. 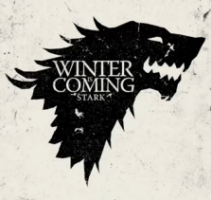 The house ruling the North, the largest but least populated territory of the Seven Kingdoms and the lands most vulnerable to Westeros' long winters that last for years at a time. They are a grim house of iron will and devotion to honor, holding to the old laws and customs of the First Men. They claim to descend from Brandon the Builder, who built the great Wall that seals the realm away from the far north. Their sigil is the direwolf, a large species of wolf that is no longer seen below the Wall. Unlike other houses, their words are not a boast or declaration, but a warning.

Our first protagonist. Lord of Winterfell and head of House Stark, Eddard is a man of deep integrity and honor who is devoted to those he loves. However, he is unbending in his honor, which gets him in trouble. At the beginning of the series, he is appointed Hand of the King and thrown into the nest of vipers that is the royal court. He tragically fails at the Game of Thrones and is eventually executed because of a teenage ruler's whim.

Wife of Eddard Stark, originally from the House Tully and above all devoted to her father, brother, husband and children. After Jon Arryn dies, she receives a letter from her sister Lysa, Jon's widow, who blames the Lannisters for Arryn's death. While her husband joins the royal court, she stays in Winterfell in order to protect her children. She gets killed along with Robb, but is resurrected as insane and possibly undead.

Eddard's oldest son and heir. While young, he proves to be a bold and promising ruler when his father leaves to join the King's court. He is loyal to his father's people and shares his father's commitment to honor above all, which gets him killed as well, for forsaking a marriage vow to "do the right thing" after he sleeps with another woman in a moment of passion.

Eddard's oldest daughter, a cute and innocent girl who is originally set to become the next Queen. Her main flaw, except for her tendency to look down on others, is that she is very naive. At first, Sansa often thinks the harsh world works like it does in romantic fairytales. Ouch. Needless to say, certain events change that. With the help of Littlefinger, she seems to be becoming more savvy, cynical and manipulative, though still has a good heart. How far will this take her in the games of thrones, we still don't know.

Arya Stark/Cat of the Canals*

Eddard's free-spirited tomboy daughter who doesn't fit into her highborn role at all. During the beginning, she mostly exists as a foil for her older sister Sansa. When the war breaks out, Arya plunges into the wide world and becomes embroiled in a surprising number of violent adventures despite her tender age.

Eddard Stark's kind and gentle eight-year-old son who dreams of being a knight and loves to climb and explore, until Jaime Lannister pushes him out a window and he becomes crippled from the fall. While in a coma, he has a dream of a three-eyed crow that gives him prophetic visions as well as magical abilities to take control of his pet wolf.

The youngest Stark, a spirited and energetic four-year old boy. Over the course of the story he grows scared and violent when his world disintegrates around him. His pet wolf, Shaggydog, is unique among the direwolves for being black and unusually savage.

Eddard Stark's (presumably) illegitimate bastard son by an unknown mother, brought home after a war. Jon has felt like an outsider among the Starks since he was very young, when he learned what it meant to be a bastard and thus why he was Catelyn's Unfavorite. The experience made him bitter and left him with a desire to prove himself. When his father leaves Winterfell, he chooses a life of hard duty in the Night's Watch to earn his own honor.

Ned's younger brother, Benjen is First Ranger of the Night's Watch at the beginning of A Game of Thrones. He comes to Winterfell to attend the dinner honoring the arrival of King Robert, and tells Ned about his worries over events north of the Wall. He also talks with Jon Snow about the boy's ambition to join the Watch, but when Jon actually arrives at Castle Black he is distant with his nephew, reminding him that men of the Night's Watch forswear family ties when they take their oaths. Shortly thereafter he heads out on a ranging in an attempt to find out what has become of Ser Waymar Royce, and disappears north of the Wall; the search for his whereabouts becomes a major plot point in Jon's part of the story.

Ned's younger sister, Lyanna was betrothed to Robert Baratheon until Rhaegar Targaryen abducted her, starting the Rebellion. She died for unknown causes in "a bed of blood" when Ned found her.

During the very first chapter of the series, the Starks find a dead direwolf (impaled through the throat with a deer antler) and its six pups; three males (Grey Wind, Summer, Shaggydog), two females (Lady and Nymeria) and an abandoned mute albino male (Ghost). "Does This Remind You of Anything?," the characters ask each other. Each Stark child takes a pup, with the bastard Jon Snow taking the albino, which is an outsider like him. The personalities of the wolves mirror their owners', as do their fates...