A Song of Ice and Fire/Characters/House Targaryen

This is a listing of members of House Targaryen that appear in the Fantasy series A Song of Ice and Fire. Visit here for the main character index. 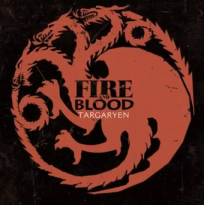 The former ruling house of the Seven Kingdoms from the capital city of King's Landing. Also known as the Dragon Kings, because they used to ride dragons and had a strange bond with them. Under the historical leadership of Aegon The Conqueror, they unified Westeros with their dragons as weapons and ruled there for 300 years. They often married brother to sister throughout their rule despite of the laws of their religion, which probably accounts for their history of mental instability among the later rulers. Their rule ended when Robert Baratheon overthrew Aerys Targaryen II and his surviving children fled into exile in the Free Cities. Members often have silver-blond hair and unusual purple eyes, and their sigil is a three-headed dragon.

Aerys Targaryen, the Second of his Name

The king of Westeros during the War of the Usurper, and the last Targaryen to sit the Iron Throne. He was known as "Aerys the Mad" behind his back due to becoming increasingly insane in the latter years of his rule. Though served ably by Tywin Lannister as Hand of the King and his own son Rhaegar, Aerys nonetheless managed to destabilize his own kingdom, eventually leading to Robert's Rebellion and his own death. Aerys was by all accounts sane during the early years of his reign, his later mental illness likely a consequence of generations of Targaryen inbreeding.

Daenerys 'Dany' Targaryen, the First of Her Name*

The exiled last princess of House Targaryen, who was born at the end the first civil war, after Jaime killed her father and Robert became King. Impoverished and hiding in the Free Cities in the East, she is initially an abused little girl living under the whims of her bullying older brother Viserys. While initially meek and frail, Dany grows stronger in every book and her destiny is far, far beyond what she ever imagined.

Viserys Targaryen, the Third of His Name

The exiled prince of House Targaryen and the older brother of Daenerys, who lives with her in hiding. Unlike Dany, he lived as a prince in his childhood and knew his family, but was still very young when he lost everything overnight. A young man with serious mental problems, Viserys has made it his goal in life to return to Westeros and take back the throne. Too bad he foams at the mouth, regularly pinches his sister's boobs and refers to himself as "the dragon".

The oldest man in Westeros, he is a maester and a member of the Night's Watch. He was a prince of House Targaryen many years ago, and was offered the crown after he took his vows. He refused and went to the Wall rather than undermine the younger brother who eventually got the crown.

Aegon Targaryen, the Fifth of His Name

A king deceased by the time of Robert's Rebellion, Aegon was called "The Unlikely," as he was the fourth son of a fourth son and absolutely no one (himself included) expected the throne to ever devolve upon him. He eventually died at the "Tragedy at Summerhall," on the same day that his granddaughter Rhaella gave birth to a son named Rhaegar (yes, that Rhaegar, Daenerys's eldest brother); with Aegon perished his best friend, Lord Commander Duncan the Tall of the Kingsguard, and Crown Prince Duncan, Aegon's son, who was called "the Small" to differentiate from his namesake. (He also had a daughter named Rhaelle who was Robert Baratheon's grandmother, which proved useful when he tried to proclaim himself king.)

Of course, readers of the prequels know King Aegon by another name: Egg, one of the main characters of the "Dunk and Egg" stories. Taking place about eighty years before the main series, these prequels cover the adventures of a seven-foot-tall hedge knight named Duncan who is persuaded to take on a bald kid named Egg as his squire. After discovering that Dunk was a genuine Knight in Shining Armor, Egg's father Maekar formally apprenticed him to Dunk as his squire, and the two began Walking the Earth.

Aegon Targaryen, the Sixth of His Name

At the beginning of the series, Viserys and Daenerys were the only Targaryens any of the other characters knew about... but that book hadn't even ended before revealing that they had a living great-granduncle, Maester Aemon, secreted away in the Night's Watch. In A Dance with Dragons, the family tree gets more complicated still.

Aegon is the son of the late Crown Prince Rhaegar Targaryen and his wife Elia of Dorne, and is thus Daenerys' nephew despite being two years older than her. Believed for many years to have been killed along with his grandfather, mother and sister during the Sack of King's Landing, he was actually switched with a common child prior to the battle, smuggled across the Narrow Sea, and brought up in Pentos by Lord Connington as his son, "Young Griff". Groomed to become a king who actually puts the people first for a change, Aegon is preparing an attempt to retake Westeros - with or without help from his kin.

Son and heir to the Mad King, Rhaegar is a Posthumous Character and victim of Second Hand Storytelling. By and large, he seems to have been well-loved by lords and commons alike... with the sole exception of Robert Baratheon, who considered him an Arch Enemy. Nonetheless, he casts a long shadow over the narrative (especially since everyone had their own opinions of him, not all of which reconcile neatly). He remains a very popular and enigmatic character despite having long ago kicked the bucket and many fans think he will prove to have a major influence on the story before it's over.

One of the "Great Bastards" that were the legitimized children of the debauched King Aegon IV Targaryen (known as "The Unworthy"), Bloodraven was an albino with a reputation as a sorcerer. Despite his own lineage, when other Targaryen bastards rebelled against the Targaryens in the first "Blackfyre Rebellion", he fought on the side of the Targaryens, and was branded as a kinslayer for killing his rebellious cousin, Daemon Blackfyre, in battle. Bloodraven served as Hand of the King under Aerys I, but due to his unpopularity, ultimately fell from grace and ended up in the Black Cells. He was released and sent as a conscript to the Night's Watch by Aegon V (AKA Egg) and eventually rose to Lord Commander. In A Dance With Dragons, it is revealed that Bloodraven still "lives" as a weirwood tree and is the Three-Eyed Crow that has been advising Bran in his dreams, being a powerful skinchanger and greenseer.