A Space Marine Is You 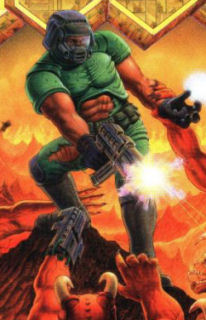 "Doom introduced the grizzled space marine to the gaming world 15 years ago, dreamed into existence by someone at id Software, probably just minutes after watching Aliens. The grizzled space marine character so captivated the imagination of first-person shooter fans that they decided to have him star in every single FPS game since."
—The Seven Commandments All Video Games Should Obey

A form of Cliché Storm for video games.

The prerequisites for this are:

If your game has the above, your plot will have a certain number of these cliches

Much of the above comes from the tendency to rip-off take inspiration from Aliens and Doom (which, in turn, are heavily inspired by Starship Troopers) along with sheer They Fight Crime-level parallel evolution. Just remember that this isn't necessarily bad or good, though, and that the cliches can be excused if the various rules are applied, especially Sci-Fi Awesomeness, and just Plain Old Fun. However, when worse comes to worst, there is also one of the ultimate rules: It's just a game.

Examples of A Space Marine Is You include: