Everything About Fiction You Never Wanted to Know.
Jump to navigation Jump to search
/wiki/A Tribe Called Questcreator 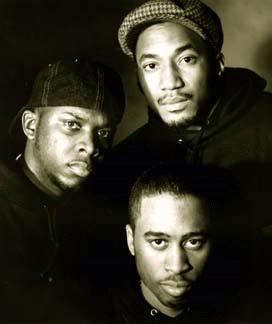 Like A Pimp Named Slickback, you have to say the whole thing

A Tribe Called Quest was a Alternative Hip Hop group, formed in 1985 and disbanded in 2017. It was composed of rapper/producer Q-Tip (Kamaal Ibn John Fareed, formerly Jonathan Davis), rapper Phife Dawg (Malik Taylor), and DJ/producer Ali Shaheed Muhammad. A fourth member, rapper Jarobi White, left the group after their first album but appears to have rejoined the group since 2006. Along with De La Soul, the group was a central part of the Native Tongues Posse, and enjoyed the most commercial success out of all the groups to emerge from that collective. Their innovative fusing of hip hop and jazz has had a lasting impact on hip hop music, helping to expand the art of hip hop production. Many of their songs, such as "Bonita Applebum", "Can I Kick It?", "I Left My Wallet in El Segundo", "Scenario", "Check the Rhime", "Jazz (We've Got)", "Award Tour" and "Electric Relaxation" are regarded as classics.

They released five albums in eight years (the first one being in 1990 and the last one in 1998), the first three LPs were highly acclaimed, but the group disbanded in 1998, because of friction between Phife Dawg and Q-Tip. In 2006, the group reunited to pay for Phife's medical expenses via touring and appearances. A documentary about the group was produced, Beats, Rhymes & Life: The Travels of a Tribe Called Quest, directed by Michael Rapaport. The group is regarded as iconic pioneers of alternative hip hop music, having helped to pave the way for innovative hip-hop artists. Allmusic calls them "the most intelligent, artistic rap group during the 1990s". In 2005, A Tribe Called Quest received a Special Achievement Award at the Billboard R&B Hip-Hop Awards in Atlanta. In 2007, the group was formally honored at the 4th VH-1 Hip Hop Honors.

Phife Dawg died in March 2016, before the completion of their final album We Got It from Here... Thank You 4 Your Service.