A Valley Without Wind 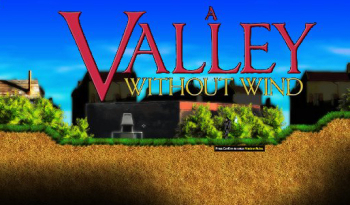 Something bad happened: reality shattered, and different places in different time, ranging from the bronze age to the Magitek-reliant ice age to the land when robots reign supreme now stand side by side. Overlords now rule the world, windstorms and monsters terrorize the survivors.

In this world called Environ, you control a glyphbearer, those who are granted power by Ilari to be able to safely venture out into the wilds not protected by Ilari's powers. Your job is to try to improve the world somehow, but don't expect this to be easy: life of glyphbearer is short, and death is not the matter of if, but when.

A Valley Without Wind is a Metroidvania-ish adventure game with elements of city-building game made by Arcen Games, the creator of AI War Fleet Command, but with the maps being procedurally generated instead of being fixed like most Metroidvania games. Your goal is to gather materials to improve your city and spell list, upgrading your characters, and take down overlord of each continent. Since death in this game is expected, you can change characters around with those in your city, or if you die, then you'll be given a replacement characters (without character upgrade), and the dead character will become vengeful ghost that can be fought.

The game has no end. When a continent is cleared, you can move on to the next.

The game also contains co-op mode, which you can join other people's world.

Tropes used in A Valley Without Wind include:

Similarly, in hot areas like Lava Flats or Lava Escape missions characters take a constant degree of damage and falling into lava means rapid incineration. A Heatsuit will negate the ambient damage and give you a couple second to get out of a lava pit, but is so heavy it disables special jumps. An Advanced Heatsuit slows lava damage down further and makes it easier to move around, and even resists cold, but still inhibits jumping. Draconians, being native to the lava flats, and skelebots are both naturally immune to ambient heat.