May the Farce Be with You

Everything About Fiction You Never Wanted to Know.
(Redirected from A Very Star Wars Parody)
Jump to navigation Jump to search 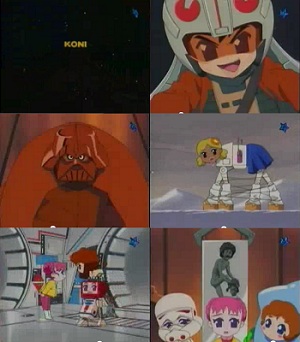 The farce is strong on this one!

Many shows have a few references to Star Wars. It's a popular film series, so the majority of the audience is likely to understand it. However, some shows go a step further, and have an entire episode that revolves around references to Star Wars, Luke, I Am Your Father scenes, Big NOOOOOOOs, and thinly-veiled Captain Ersatzes of Darth Vader. The focal or point-of-view character usually plays the part of Luke Skywalker, since episodes frequently take most references from primarily A New Hope and The Empire Strikes Back (primarily the former).

The episode need not be a parody, and in many cases is an Homage, and sometimes a full Whole-Plot Reference.

Compare Charlie and the Chocolate Parody.

Examples of May the Farce Be with You include: