Everything About Fiction You Never Wanted to Know.
Jump to navigation Jump to search
/wiki/Aaron Cometbuscreator 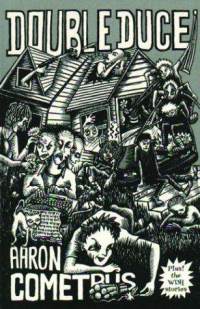 "Nothing sounds quite so good as failure. A band that ages well, whose members go on to interesting careers as filmmakers and silkscreen artists -- such a thing does not interest me. Yet put on a song sung by someone who went on to be a preacher in Cuba, Missouri; who hung herself in an art gallery; whose moment of hope, as captured in the scratchy grooves of a seven inch, was but fleeting before an avalanche of total doom and failure -- now we're talking! Now that's music! That's punk. Listen to the Smoking Pipes or Violent Femmes, for example, with their terrible hole-in-the-soul wounded passion, before both patched it up with religion. You can hear how it was either god or suicide -- no other choice. To which I must respond with a quote from Code of Honor: 'Better to die than to live a fucking lie.'"
—Cometbus #52, The Spirit Of St Louis

Cult Classic Zine author. Influential in the Bay Area scene in the 80s and 90s -- the scene that spawned 924 Gilman, Maximum Rocknroll, and too many good bands to count. He has been in a number of these, too: Crimpshrine (with Jeff Ott, of Fifteen), Sweet Baby Jesus, Astrid Oto (with Cindy Crabb, author of Doris), Pinhead Gunpowder (with Billy Joe Armstrong), and Thorns of Life (with Blake Schwarzenbach, of Jawbreaker), among others.

For the longest time, he handwrote and photocopied all of his zines, giving them a distinctive [dead link] style. These days, he alternates between typing and handwriting things. You can still get his zines by mail though, from various zine distributors.

His work has been collected in two anthologies. The first one, Despite Everything: A Cometbus Omnibus includes numbers 24 through 43, with selections from the first four years. Add Toner: A Cometbus Collection came out pretty recently, and would be an excellent place to start. Also great are Double Duce (the chaotic history of a bunch of punks living in the eponymous house; cover pictured) and issue 47, Lanky (a short novel about his life with a girlfriend of his, Larenka, aka Lanky).