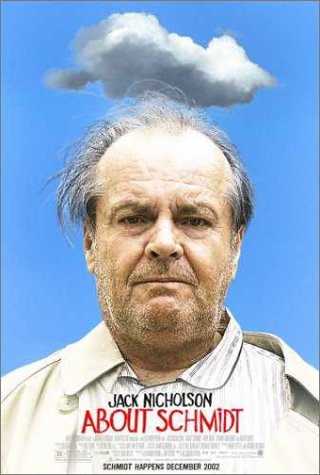 The kind of movie you see late at night on Comedy Central. You keep thinking: "When does this movie become funny?", until you realize it is in fact not a comedy, but a drama. And then you continue to watch it anyway.

About Schmidt is a drama movie starring Jack Nicholson, playing Warren Schmidt. He is not a particularly nice person, since... well... we are talking about Jack Nicholson, so what did you expect?

Warren Schmidt just retired and has to face the fact that he has to spend his last remaining years on earth with his boring nagging wife. Out of boredom, he decides to adopt a foster child in Africa, to whom he writes letters about how much his life sucks now. One of the few things that keeps him going is his daughter, who is about to get married to a dimwitted, trailer-trash-like waterbed salesman.

As he goes out one day, mulling about how his wife he annoys him to no end, he returns to find that his wife has died from a blood clot in her upstairs department. Not much later, he finds some old love letters lying around the house. It turns out that his wife had an affair with his best friend, some 25 years earlier.

Deciding he had enough of just waiting for death to knock on his door, Schmidt embarks on a road trip to (stop!) his daughter's wedding, visiting the places he frequented throughout his life on his way over there.

The whole time Schmidt narrates his views through the letters he sends to his foster child in Africa. Along the line he reflects about the life he had, he learns to miss his deceased wife and starts questioning if anything he did actually made a difference to anyone.

The movie, while set for a Downer Ending (is he, or is he not going to kill himself?), instead ends on a Tear Jerker.

Tropes used in About Schmidt include:
Retrieved from "https://allthetropes.org/w/index.php?title=About_Schmidt&oldid=1543020"
Categories: