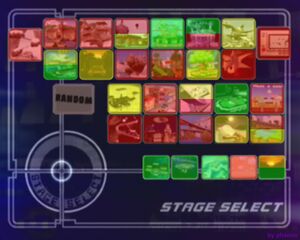 Red = banned in tournaments. Yellow = banned on the first round.

A gaming community's refusal to congregate in any but a few choice arenas for play. Certain levels are played on over and over again without any deviation due to people either knowing a certain stage well or the level requiring a certain amount of skill and knowledge to get around on, which filters out people who never played on that level before. A type of Complacent Gaming Syndrome.

For players who looks down on anyone who likes playing on anything but a few set stages, see "Stop Having Fun!" Guys.

Examples of Abridged Arena Array include: