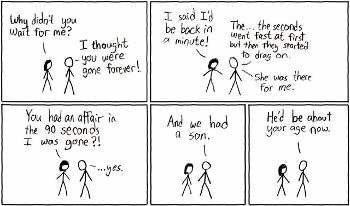 When a couple is separated against their wishes, and their love is particularly strong, it is fully expected that they will try to find each other, and refrain from getting involved with anyone else. However, sometimes this is actually quite hard to accomplish, especially in the case of someone believing their lover will never come back, or that they are dead. But unexpectedly, their lover comes back to them, and they are happily reunited.

If she wants to wait but is coerced into marrying, it's You Have Waited Long Enough — whereupon her true love will show up in time to save her from the wedding.

If she does wait, and a reunion reveals she is no longer in love, it's Old Flame Fizzle, which tends to be treated far more sympathetically.

Not to be confused with the Trope Namer, the King's Quest game of the same name.

Contrast Second Love, The Mourning After, You Have Waited Long Enough, I Will Wait for You.

Examples of Absence Makes the Heart Go Yonder include:

A subtrope involves a young man going on an adventure in order to impress the object of his affections, and returning to find that she's become engaged, or even married, while he was away. (Often her choice will demonstrate that what really impresses her is a man with a steady job who can be relied on to stay by her instead of disappearing off on adventures.)

Examples of Absence Makes the Heart Go Yonder include: