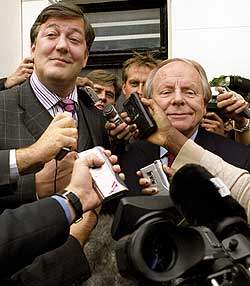 Charles and Martin in their element.

Absolute Power, a BBC radio comedy about PR firm Prentiss McCabe, began as a Spin-Off of an adaptation of a comedy whodunnit. The radio series was subsequently adapted for television. The two main characters are Charles Prentiss (a man with no scruples whatsoever) and Martin McCabe (who has scruples, but is usually too lazy to apply them). In the radio series they were assisted by Sandy, a sensible young woman on a training scheme, and later by Clive, a total incompetent. Another recurring character is Archie, their regular government contact.

Stephen Fry and John Bird reprise their radio roles for the television series, which also gives Prentiss McCabe more staff, particularly the efficient but honest Alison and the natural-born liar James. In the radio series they mostly handle government work, but in the TV series they are more likely to be representing celebrities. Both series are nonetheless satires, one on politics, the other on the nature of celebrity.

Not to be confused with the book by David Baldacci, which was made into a Clint Eastwood film, although both are based on Lord Acton's observation that "Power corrupts, and absolute power corrupts absolutely." Charles Prentiss would probably add "And the problem with that is?"

Tropes used in Absolute Power (radio) include:
Retrieved from "https://allthetropes.org/w/index.php?title=Absolute_Power_(radio)&oldid=1831757"
Categories:
Cookies help us deliver our services. By using our services, you agree to our use of cookies.