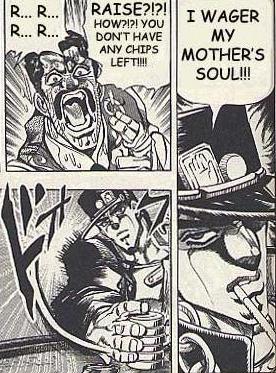 Also, said chips stand in for souls. Yes, it's that kind of series.

After all, it has to be entertaining and suspenseful, or else no one would want to do it. Unfortunately, as anyone who's watched Poker on television knows, the same things that are fun to play can be painfully boring to watch.

But luckily, storytellers have come up with a way of making gambling interesting. They do this by raising the stakes to incredibly high levels, thus making this Serious Business. For example, watching someone bet $20 at blackjack will probably not be very exciting. But if the main character is going to win millions of dollars if he wins and die if he loses, then the audience may be more interested.

Stories carrying this trope tend to have a few things in common:

Make note: This includes some versions of Russian Roulette. Deals with devils are also common. May lead to being Trapped by Gambling Debts. If the game is televised, it is probably a Deadly Game. If you actually wager ownership of a person, then you may end up Losing Him in a Card Game or gaining a Wager Slave. Related to The Bet.

"You and this Groaci functionary played cards for a planet?" Earlyworm said, attempting a 509-C (Stunned Incredulity) which bore an unfortunate resemblance to a look of utter bafflement.
"Not quite," Retief said. "You don't play Drift with cards."
"Dice, then, sir! You diced away a virgin world, a bright star in the diadem of Terran dreams of enlightened economic empire."
Retief shook his head. "Flith lost," he said.