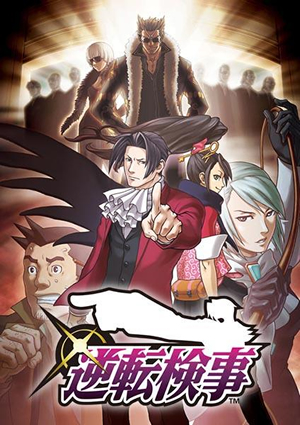 He has Logic and he knows how to use it.

A spinoff of Ace Attorney, Ace Attorney Investigations landed its American and European releases in February 2010. Investigations puts Edgeworth as the main character, along with sidekicks Dick Gumshoe and the newcomer self-declared thief Kay Faraday. The game took on a more traditional point-and-click adventure game style, with walking sprites exploring areas rather than simply moving from scene to scene. Rather than engaging in courtroom battles, Edgeworth solves mysteries through Logic, and by countering arguments from witnesses, culprits and the cocky Interpol Special Agent Shi-Long Lang.

A sequel Gyakuten Kenji 2 was released in Japan in February 2011. It features a system called "Logic Chess". This does not necessitate playing chess, but instead acts as a visual metaphor. When Edgeworth can't find a fault in the witness' testimony, he can instead ask one of two questions. Asking the correct one will cause the player to "take" one of their "pieces", allowing the "game" to move further. An incorrect choice will have the reverse happen, and the player will lose points from their Truth meter. There are no plans for the sequel to be localized at this time.

Naito:Edgewooooooorth! The game isn’t over yet! I... I...
Edgeworth: That’s enough. This game will continue in the courtroom.

Kay: Dark skies of evening, when no other bird dares to take wing, one alone remains all-seeing! Now, witness the true power of a real, modern-day Robin Hood!

Kay: Wow, you really know how to laugh at inappropriate moments!

Edgeworth: You know I've seen it occur a lot recently, and it's been bothering me greatly...
Edgeworth: ... but why does nobody know how to properly capitalize and space nouns anymore!?

Edgeworth: I suppose this is the Pink Badger? But since it has the same design, doesn't it seem forced to call this one a female?
Kay: You think so? I mean, just look at how long her eyelashes are!
Edgeworth: That's the only difference.
Kay: And the fact that she's pink.
Edgeworth: Yes, and?
Kay: And her lips are red! See, lipstick!
Edgeworth: (thinking to himself) What? She has nothing to say about the giant pink ribbon, or is that too obvious?

Edgeworth: ...Might I recommend that you review what the word "evidence" means.