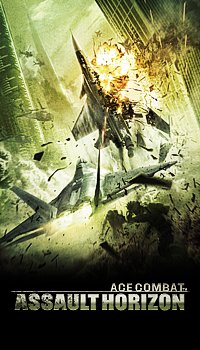 The twelfth game in the Ace Combat series, intended as a Continuity Reboot for the series. Like Ace Combat Joint Assault, it is set in the real world. Released in 2011.

It's the year 2015, and an unusually large rebellion named 'SRN' surges in East Africa. The governments of the region are quickly overwhelmed, and decide to request the United Nations for help, who in turn call upon NATO. Given the situation, NATO decides to commission the 108th Task Force, an special unit comprised of fighter pilots & military commanders from several nations, including America and Russia. However, things get worse as the rebels are revealed to be in command of a weapon of mass destruction named "Trinity". Enter main character and 108th Task Force leader William Bishop, who sees himself and his friends involved in an escalating conflict over control of Trinity, which quickly spreads from the deserts of East Africa to the entire planet.

The game now has a character sheet.