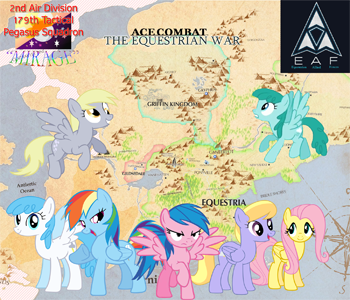 They are not Ghosts of Razgriz, but they can certainly perform great feats (from left to right: Lightning Bolt, Derpy, Rainbow Dash, Firefly, Cloud Kicker, Medley, Fluttershy.

A crossover fanfic that combines My Little Pony: Friendship Is Magic with the Ace Combat series of video games. In this story, the griffins prepare an invasion on Equestria and a team of brave pegasus ponies (Firefly, Rainbow Dash, Lightning Bolt, Cloud Kicker, Fluttershy, Derpy and Medley), known as "Mirage" squadron, is attempting to protect their land and mount a comeback. While not a direct adaptation of any Ace Combat game, the fanfic uses a lot of references to the Playstation 2 titles, as well as Ace Combat 6 Fires of Liberation and the latest Assault Horizon.

Currently (as of May 27th, 2012), the fanfic has 18 chapters out of about 20 planned (with a possible epilogue). Character sheet can be found here.

Tropes used in Ace Combat: The Equestrian War include:

Firefly: Seems like we've arrived in the nick of time. What does that make us, Thunder?
Lightning Bolt: Big Mane Heroines, Flash!

Fluttershy: I’m a pony that represents the Element of Kindness! But, to you... I will show no mercy!

Twilight Sparkle: We have to stand together once more, but this time, not as earth ponies. Not as unicorns. Or pegasi. We must stand together as the ponies of Equestria! It’s true that, on the outside, each of us is different. We live in different parts of Equestria, we have different names, we look differently. But... we have fought, suffered and died together! Deep inside, in our hearts and souls, we are all children of this land! We cannot ignore the time when our land is in danger. We must fight! We must have courage! I don’t know if you will decide to follow me or not, but I want to live in Equestria with my friends! That’s why I will keep fighting! To the bitter end, if it must be! [...] Everypony, we’re gonna take back Canterlot today! Let us make haste! The sun and the moon will lead our way to victory! Know that this is not the day we will surrender! This is not the day we fall! This day we fight! FOR EQUESTRIA!!!

Twilight Sparkle: No matter how far away you would be or how badly things may turn out to be, Rainbow, we’ll always be there for you.
Pinkie Pie: Yeah! That’s what friends are for, right?

Black Star: I feel regret for killing her parents. Let her know that.