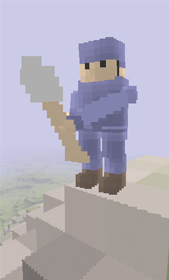 Ace of Spades is a free online multiplayer First-Person Shooter.

To sum it up simply, it's what you might get if you were to cross Team Fortress 2's Capture the Flag mode (using a briefcase as the intel) and color coded teams with Minecraft's building blocks and boxy character models. It has a small, but dedicated userbase.

By default, the game takes place on a large, randomly generated map with hills on Blue Team's side (west), and rivers on Green Team's side (east). You play as a member of one of these teams, with the choice of weapons between a rifle, a sub-machine gun or (as of v0.58) a shotgun. You other equipment consists of a spade (for removing and acquiring blocks), 50 blocks (for building), and three grenades. The point of the game is to capture the enemy's intelligence a certain number of times. You may change the color of the blocks you place by using the arrow keys to look through the pallet, or by right-clicking something else to sample its color. A popular strategy is to build a foxhole in the side of a hill, using the same color blocks as the hill, and sniping in there with a rifle.

There is no kill-cam, so you do not know the location of your killer unless you manage to spot him before you fall.

On December 2012, Jagex released their own version of the game, Ace of Spades: Battle Builder, developed with the original development team's collaboration. It plays rather differently, with less emphasis on building and more on shooting and jetpacks. It was followed by Block N Load in 2015. The Jagex version of Ace of Spades shut down in 2018.

The fan community hosting the Classic version of the game is located at Build and Shoot, and the old game's wiki is here (archived).

Jagex hosts a wiki for their version of the game.

Tropes used in Ace of Spades (video game) include:
Retrieved from "https://allthetropes.org/w/index.php?title=Ace_of_Spades_(video_game)&oldid=1693101"
Categories: