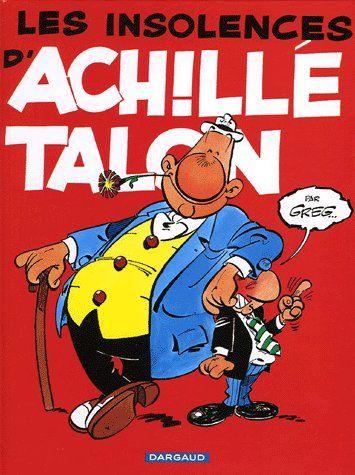 Achille Talon is a Belgian comic created in 1963 by Michel Regnier a.k.a. Michel Greg in Pilote magazine. Originally one-page gags, it turned quickly to two-page gags before becoming complete 62-page adventures in 1974, and continued until its creator died in 1999.

The character is an Homage to Monsieur Poche, a pretentious bourgeois created by Alain Saint-Ogan who's reputed to have created the ligne claire style and whom Greg was such a big fan of that he remade his star characters Zig et Puce just to give some royalties to the poor old master.

Achille Talon, according his author, "knows everything and improvises the rest of it. Apart of this, he's generous, petty, pacifist, aggressive, progressist, bourgeois, selfless, jealous, intrepid and a bit of a coward. In sum, honest and brave just like you and me..."

The comic book was translated for different markets in the 80's and published in English under the title Walter Melon with little success, as it was so specifically French by its main character and its language. Readers hardly understood Talon's favorite interjections, "hop !" and "bof..." which simply express positive/negative moods.

Tropes used in Achille Talon include:

I CAN'T DO IT! I CAN'T NAIL HIM BETWEEN TWO EYES HIDDEN BY A NOSE LIKE THIS!