Across the Universe (film) 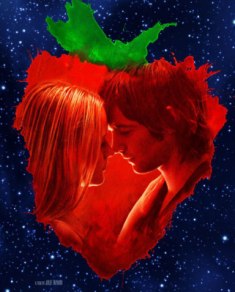 Lucy and Jude. The strawberry heart is his idea.

2007 Jukebox Musical film featuring songs written by The Beatles. It was directed by Julie Taymor.

It stars Jim Sturgess as (Hey) Jude and Evan Rachel Wood as Lucy (In The Sky With Diamonds), whose romance is the central plot that unfolds over the backdrop of The Sixties.

Jude Feeney is an aimless young man from Liverpool who heads to America in hopes of finding his absent father, who knew his mother in WWII but had never been told that Jude was born. When the man proves to be something of a disappointment, he falls in with Ivy League frat boy Max (...well's Silver Hammer, not sung in the film) Carrigan (Max helped him find his dad; Jude helped Max escape campus authorities; it went on from there). The two move to New York with Max's sister Lucy. Jude finds himself falling for Lucy, and everyone falls for the hippie scene present there. But the real world intrudes as The Vietnam War wages on, and the political involvement (willing and otherwise) of various members of Jude's True Companions becomes more and more perilous. It threatens to pull Jude and Lucy apart -- she's involved, and he doesn't approve of that part of the movement she's in...

Tropes used in Across the Universe (film) include:
Retrieved from "https://allthetropes.org/w/index.php?title=Across_the_Universe_(film)&oldid=1677463"
Categories: