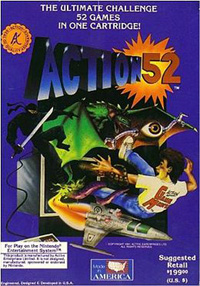 "The Ultimate Challenge" here would be to convince yourself that this was actually worth $200.

Action 52 is a collection of 52 games for the NES—well, perhaps "games" is too kind—released by Active Enterprises and advertised in the back of many gaming magazines of the day. It was famously sold for $200, which would be a bargain for 52 games worth playing. However, these games... weren't.

The truly amazing part? The folks at Active were apparently big dreamers, and accompanied the grand unveiling of Action 52 with a press release, proclaiming the upcoming release of Cheetahmen action figures and a "Disney-quality" Saturday morning cartoon, and the Action Gamemaster, a portable system that would play games from nearly every console available at the time. None of these products ever came to fruition, as Action 52 wallowed in obscurity, but it has gained a new lease on life in the Internet age as Snark Bait.

This isn't to say that Active Enterprises never did anything again; indeed, there was a second Action 52 compilation on the Genesis (which Active farmed out to another developer, who did a much better, though still just barely passable, job), and a third was planned on the SNES (likely scrapped when they couldn't figure out a way around Nintendo's lockout). Additionally, a sequel to Cheetahmen was recently discovered, with hundreds of cartridges having been made of the very unfinished Cheetahmen II, but this was never distributed. Then Active Enterprises never did anything again.

A history of how the monstrosity came to be is in The Other Wiki. The Angry Video Game Nerd reviewed the game here. Even though his review contains some inaccuracies, it still sums the games up pretty well. A more detailed series of all 52 games [1] can be seen here.

This collection of games is almost universally considered a pile of crap. However, the background music used in Cheetahmen (and reused in Cheetahmen II) is an exception: it is surprisingly well-regarded, with a large number of musical remixes.

Action 52 has been given a shot at redemption with two projects: the Action 52 Owns Project (in which indie game developers are collaborating to remake each game in the collection) and Action 52 Revisited (which tries to relate all games together). Hey, it's not like they can make the games worse, right? Also, there's plans of a company for releasing an official Cheetahmen 3 game for the Xbox Live Arcade.[2]

The original Action 52 tropes (of which there are not actually 52):
Tropes present in Action 52 Owns or other remakes: