Everything About Fiction You Never Wanted to Know.
(Redirected from Action League NOW)
Jump to navigation Jump to search 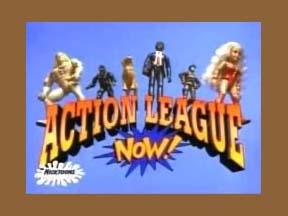 Action League NOW!
Starring The Flesh: He's super strong and super naked.
Thunder Girl: She flies like thunder.
Stinky Diver: A former naval commando with an attitude as bad as his odor.
And Meltman: With the power to ... melt!

Originally a segment on Nickelodeon's Animated Anthology KaBlam!!, Action League NOW centered on the crudely stop-motion-animated adventures of four superhero toys, who were forever going off on missions that were either ill-defined or just plain weird, and nearly always involved trying to stop the corrupt "The Mayor" in some zany scheme of his. What made it distinct was that the toys were all shown in their "natural state" of being 6 inches tall in a human world, seldom even moving on their own (unless being thrown or the like, which is why the show was sometimes described as being filmed in "Chuck-imation").

Our heroes were The Flesh (a Conan the Adventurer doll modified to replace his hips/loincloth with a ken type bulge who was described as "super-strong and super-naked"), Thunder Girl (a superheroine with a Sindy doll head who just flew around and complained about how stupid her teammates were, even though she could be just as clueless as the others), Stinky Diver (a loose cannon with a thick British accent and perpetual body odor, and is made from a G.I. Joe Shipwreck action figure) and Melt-Man (a not-too-bright melted G.I. Joe-like figurine "with the power to... melt!"). They tended to suffer horrible injuries.

Announcer: With a door closing on any hope, the league has one last card to play...
Thunder Girl: No please!
Stinky: Don't hurt us!
Meltman: We'll be your best friend!
Announcer: ..The wuss card.

Announcer: Will his dishonor get away with his fine china chikanary?
The Mayor: I'd tell you, but they won't show me the script!

The Chief: Let me guess; There's nothing you can do!
Bill the Lab Guy: Correct.

Meltman: So that's why he stinks. (the League look at him) What?

"Hmm, a large, heavy dangerous object, rigged to fall on anyone standing on that bullseye...At least there's no booby traps! All clear!"

"And now it's time for Ask The League, where real children ask real questions to fake superheroes."

Stinky: I don't know Thundergirl, what's the difference between Meltman and a sack of manure?
Thunder Girl: The sack!

Thunder Girl: It's taco night!
The Mayor: You pretty little fool! They'll only give you gas!