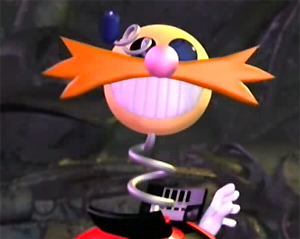 Muhahaha! Once again, you fools have been tricked!

"Alfred, go get that device that can tell us if someone is Clayface, a Martian, or a robot."
—Bruce Wayne, Batman Adventures

A character, usually one relatively high on the power scale, loses a fight. Sometimes they die, other times they're just humiliated. The point is, they just got their butt handed to them by the other guys in a largely fair fight. Is this the end of our eternal rivalry between good and evil? Has one side truly triumphed!?

Not really, no. It turns out that the truly epic character we just saw get beaten up was Not Himself. Rather, he was Actually a Doombot, either a proxy robot or an impersonator who was pretty much impossible to distinguish from the genuine article until the writer told us so at the last minute or later.

The narrative role of this trope is obvious—it works to prevent The Worf Effect, and also insure that characters don't "really" die, thus allowing them to come back on next week's program. This can, nonetheless, still come off as an Ass Pull writ Shaggy Dog Story since there are rarely ever any clues given that the character was really a doombot, nor does it have any future relevance in the story.

A semi-popular form of Retcon. Often involves by necessity Ridiculously-Human Robots. See Opening a Can of Clones for some of the negative results that crop up when this trope is used over a long period of time. Compare Fighting a Shadow, Backup Twin, Cloning Gambit, Remote Body, and Robot Master. If the original simply comes back with little or no explanation, then it's a case of Joker Immunity.

Examples of Actually a Doombot include:

Wily: It worked, didn't it?