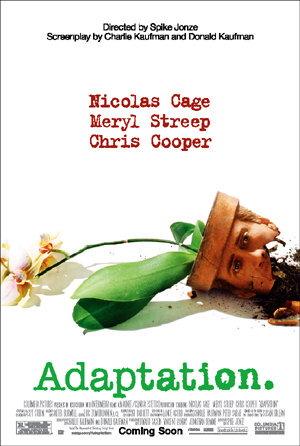 Yes, the screenplay for this film is co-credited to a fictional character in the movie. A good warning for what is about to come...

Screenwriter Charlie Kaufman, fresh off the success of Being John Malkovich, had a problem. He'd been hired to adapt the Susan Orlean book The Orchid Thief, about her experiences with rare flower hunter John Laroche, into a film, only to find out it had no real story and was mostly about flowers. Going out of his mind with writer's block, he eventually went off the deep end and wrote a screenplay beginning with:

This only begins to touch upon the Post Modern head trip that is Adaptation. This film functions both as a surprisingly effective film version of Orlean's book, with Meryl Streep as Orlean and Chris Cooper in an Oscar-winning performance as Laroche, retaining as much as possible the botanical and historical treatises on orchids; and as a layered deconstruction of the creative process, with neurotic intellectual Charlie (Nicolas Cage) and his tortured quest to write a movie where nothing happens, "like in real life", conflicting with his free-spirited twin Donald (oh yeah, Charlie Kaufman gave himself a twin brother also played by Nicolas Cage) who has written a trashy thriller full of car chases and murders - the exact kind of movie Charlie hates. But it's also increasingly the movie he's in after a meeting with screenwriting mentor Robert McKee inspires him to move the story steadily further away from reality.

All this plays against the raging existential crisis running incessantly through Charlie's mind. The theme of "adaptation" gains a triple meaning throughout the film, referring not only to Charlie's attempt to adapt Orleans' novel, but also to the evolutionary marvel of orchids, and also to Charlie's own attempt to evolve, to "learn how to live in the world."

This article is about the movie titled Adaptation. For adaptation-related tropes, see Derivative Works.

Tropes used in Adaptation include:
Retrieved from "https://allthetropes.org/w/index.php?title=Adaptation&oldid=1913132"
Categories:
Cookies help us deliver our services. By using our services, you agree to our use of cookies.