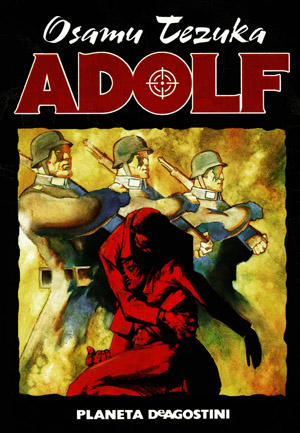 This is the story of three men named Adolf. Each one lived a very different life, but they were bound together by a single twist of fate...

An epic story of war, friendship and betrayal from the God of Manga himself. Spanning approximately half a century, from the Berlin Olympics to the then-present of The Eighties, focusing primarily on the years leading up to World War Two, Adolf is by turns a Coming of Age Story, Spy Fiction, Romance & a fairly well-done Author Tract about the evils of war and racism.

One thing that makes Adolf fairly unique is that, despite having only one name in the title, it has three title characters. They are Adolf Kaufman, the son of a German diplomat and his Japanese wife; Adolf Kamil, the Japanese-born son of a pair of Jewish German expat bakers; and some guy who flunked out of art school.

What's also interesting is that unlike most WWII stories you're probably familiar with, it gives an intimate look into the daily lives of people in the Axis Powers. Tezuka himself lived through the war and many of the later chapters were based on his own experiences with dodging American incendiaries as a lad.

It was published in English by Cadence Books & Viz for a time, but has sadly been out of print for a while. There is also an English Scanlation floating around on the internet, though of questionable quality.

Tropes used in Adolf include:
Retrieved from "https://allthetropes.org/w/index.php?title=Adolf&oldid=1692341"
Categories: